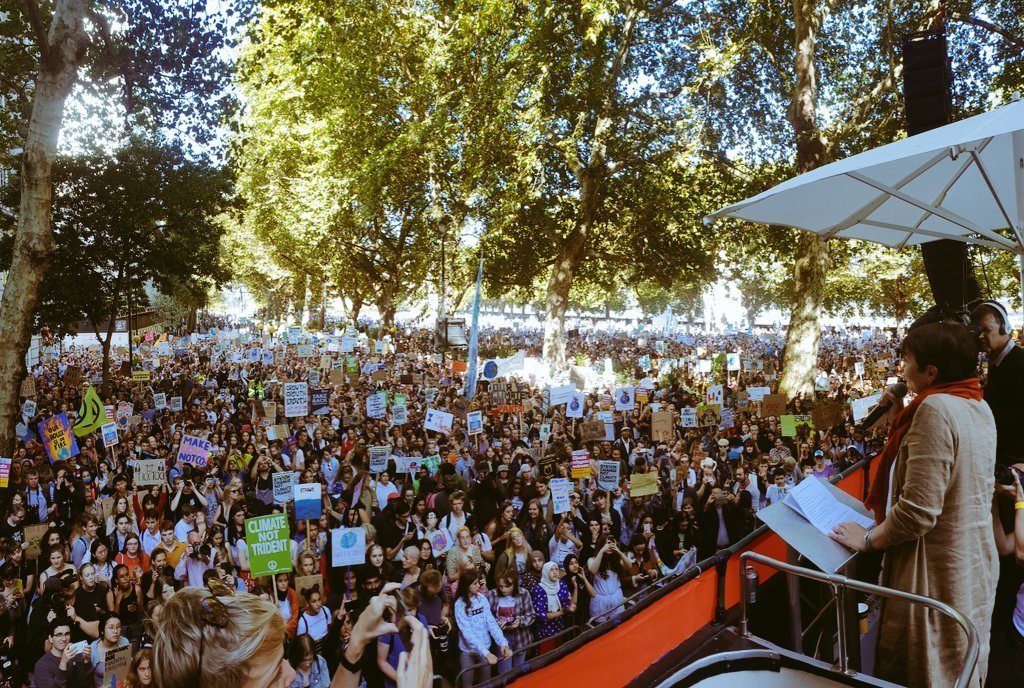 The Climate Strikers have called for a Green New Deal, and our Bill shows how it can be done – but it will need all of us to make it happen.

The Green New Deal Bill we launched on the day of the Global Climate Strike is a response and a tribute to the students and young people in the UK who have played such a critical role in bringing the climate emergency to the attention of policy makers and the public, and who have taken to the streets to call for a Green New Deal.

It unites with, and complements, legislative proposals in the US, and campaigns in the US, Canada, Europe and this new movement for the Green New Deal in the UK. It supports the hard and detailed work of think-tanks and civil society groups working on plans for a Green New Deal for the UK nationally, and locally.

Our climate, our society and nature are in crisis, but governments are failing to act. Rising temperatures and extreme weather create health emergencies, make areas prone to flooding, threaten livelihoods, make harvests unpredictable, and destroy jobs. Around the world people are being displaced from land that is no longer habitable, and entire economies are being destroyed. Greenland’s ice shelf is melting. From the Amazon to the Arctic, the world is on fire. It’s not just the climate. Nature is in crisis, too.

These changes are exacerbating a parallel and linked social crisis. Inequality in pay, wealth and health in the UK is reaching US-levels, with devastating consequences. In the UK, people with jobs are unable to feed their families, or in some cases even afford somewhere to live. For those who have jobs, their employment is increasingly insecure and unreliable. Many people are borrowing to cover basic expenses. An estimated 8.3 million people can’t keep up with debts or Bills. Secure housing is beyond the reach of many, with thousands living in conditions unfit for human habitation. In twenty-first century Britain almost a third of children live in poverty.

None of this is a coincidence. All this damage is driven by the way that we have chosen to manage the economy which has benefitted a very tiny number of people and a few giant corporations, with the price paid by most of the rest of us, and by the planet. It is now clear that we need a bold and radical plan to rise to the challenge of the climate and nature crises at the scale and speed that scientists say is necessary. We cannot and will not countenance economic policies that have led to 20 percent of people in the UK living in poverty for a moment longer. To meet these challenges, we need to transform our economy and society. Nature and our climate demand it, the people need it.

That means that we have to face up to three challenges. First, we need to transform the way the economy is managed, so that our democratically elected government, not the ‘invisible hand of the market’, set our future direction. With government back in the driving seat, we will be able to balance fiscal and monetary policy so that they work in tandem to stabilise and re-balance the economic system and public finances to enable both government and the private sector to invest in the transformation of our economy and society. We must also move away from chasing ever increasing economic growth as our primary goal and instead prioritise the improvement of people’s health and well-being, the reduction of inequality, tackling the climate emergency, and the restoration and protection of the natural environment on which our lives and livelihoods ultimately depend.

Set free from false economic constraints demanded by financial interests that benefit the wealthy, – government will be free to work with the private sector to invest in the innovative work programme needed to transform everything from the way that we produce and consume energy, heat and cool our homes, travel, connect our towns, cities and rural areas, the way we grow the food we eat and the way we work. Such investment will create jobs and generate income, including tax revenues for government. In other words, the investment will pay for itself.

We urgently need to embark on the programme that can transform society so that it is fairer and works better for all of us without breaking the ecological systems on which we all depend. We won’t be equipped with everything when we begin, but we already know more than enough to start. And it will need the contribution of every single one of us.

It will need all of us: workers, investors, creatives, volunteers, engineers, scientists, farmers and factory workers, administrators and accountants to come together in our workplaces and in our communities. The Green New Deal will need all of our skills, talents and resources to bring about the transformation of the UK. No-one will be left out. The economy and society we create together will enhance all our lives, both now, and for future generations. It will be framed and enabled nationally, but key elements will be devised and delivered locally: involving every person in the country in some way.

We need more legislation to unleash the full potential of the Green New Deal, but we can take action straight away. We can begin by investing immediately in steps to transform our infrastructure, while we simultaneously legislate for a Green New Deal that will restructure our economy and the finance system to enable us to support the transformation of almost every aspect of our lives, and to come together to draw up the ten-year action plan that can transform the UK. That’s what our Bill seeks to facilitate. Working together, we can create a better future. For all of us, and for the planet. We have ten years. Together, let’s make it happen.